Yesterday a friend and nature-minded mama asked me “How we can encourage outdoor play during this transition season before the beauty and built-in activity of the snow arrives.”

November is a tough month. It’s not quite Winter yet, but it’s certainly cold out! We’re not sure how warmly to dress or what we can do outside that would be fun. The Fall leaves that dazzled and called us out in October are gone, leaving everything looking dead outside. Oh, and it’s dark by five o’clock! That doesn’t leave much time after school to get kids outside in daylight.

Another reason we’re more likely to stay in this time of year is the preoccupation with Thanksgiving and the flurry of tasks associated with it like cleaning and decorating the house.

It’s a challenge to motivate myself and my kids to enjoy the outdoors this time of year. I have found a few things that work to encourage us that mostly involve bringing nature indoors.

I look for ideas and activities to link our surrounding natural environments to what we’re already doing this time of year. An obvious one is feeding the birds.

Telling my kids, “We’re going outside to collect pinecones to make bird-feeders!” is more likely to get them excited than telling them, “You have to go outside!”

We hang our homemade bird-feeders outside a window where the kids can watch them eat.
This is a simple way to connect with the natural world from our (warm) home.

Another fun activity is to again go walking and collect various natural objects like pine boughs, pinecones, acorns, and twigs to make wreaths or decorative center-pieces for the holiday table. Even if you don’t have a woods to go searching in, you can likely find pinecones and sticks just walking in a city park or preserve. The idea is to look for inspiration from the natural environments all around you. They are there!

A project we are trying this year is growing amaryllis flowers for Christmas. This one doesn’t involve getting outside, but it does bring some nature into our lives and that’s important too!

The craft projects are fun and there are a million of them on-line. Go see what inspires you to get outside or bring the outdoors in.

If the projects are not your thing, try inviting other families out to play with you. There is strength and motivation in numbers! Meet on the playground Saturday morning or after-school armed with a thermos of hot chocolate. And bundle up!

As many of you know, I am raising a little naturalist. My youngest daughter has always had a thing for the outdoors. From the very first time we took her camping at about 9 months old, and she ate so much dirt it was coming out of her diapers, to when she was a toddler and picking up every rock, leaf, acorn, stick, and flower in sight, to today when she can name off animal facts like an encyclopedia. This kid just absorbs nature. And she is so smart and happy because of it (no bias there).

For generations, parents have understood that playing outdoors is good for kids. When we were babies, my mom even put us in snowsuits to nap outside. Science is now catching up and there is mounting research to document just how nature experiences benefit us physically, cognitively, emotionally, and spiritually.

Let’s look at one small area of study: Dirt. While reading the book “The Nature Principle: Reconnecting with Life in a Virtual World”, by Richard Louv, I was surprised to learn that dirt could be good for kids in some not-so-obvious ways.

“A study conducted by Dorothy Matthews and Susan Jenks at the Sage Colleges in Troy, New York, has found that a bacterium given to mice helped them navigate a maze twice as fast. The bacterium in question is Mycobacterium vaccae, a natural soil bacterium commonly ingested or inhaled when people spend time in nature. When the mice were tested after three weeks’ rest, the benefit was no longer statistically significant, but, Matthews said, the research suggests that M. vaccae may play a role in learning in mammals.”

And later, he links this soil bacterium to potential mental health benefits as well:

“Even exposure to dirt may boost mood, along with the immune system. The research noting the positive effect of Mycobacterium vaccae on the ability of mice to run a maze also noted a reduction in anxiety. A separate study, conducted at Bristol University and reported in the journal Neuroscience, found that mice exposed to M. vaccae, the “friendly” bacteria found in soil, produced more serotonin”.

So, my mother was onto something. Playing in “good, old-fashioned dirt” as she calls it, is likely doing more good for kids than meets the eye.

Now when I think back to my daughter sitting on the ground at our campsite or on the beach, gleefully running her fingers through the earth and stuffing it into her mouth, I can’t help but wonder how these early experiences shaped her. Did we unknowingly give her an intellectual advantage by tapping into nature this way? When I look at her, I see how much she learns about the world from observing and interacting with nature. Just this Fall, we were walking together in the forest. She noticed the changing colors of the leaves and said, “Mommy – there’s something strange about this world; it’s always changing.” The wisdom contained in that one observation will save her so much suffering in this life!

It occurs to me that this child is ‘nature smart’ in the way that some people are ‘book smart.’ She learns from being in the living world. She is drawn to the lessons of plants and animals. She feels compelled to peel the bark off a tree and see underneath. She picks up on the patterns of color, shape, and lines so abundant in the living world. It is a gift to have this kind of intelligence because it will always connect you to what truly matters: life.

If you are raising a little naturalist, or just want to take advantage of the many ways nature can enrich your child’s life, I recommend checking out these resources: 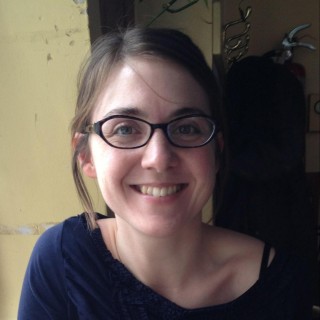 I live in Albany, NY with my husband, two small children, and our dog. Together, we make family life adventurous! As a Certified PCI Parent Coach®, I feel passionately about helping other parents fulfill their dreams for a thriving, loving, and fun family. I feel strongly that play, nature and creativity are necessities of life. With that in mind, I can often be found outdoors exploring the woods with my kids and dog in tow. You can follow our adventures and find inspiration to begin your own here: https://www.facebook.com/thesupportedparent